Recently, during my performance assessment, I was asked to rate myself. Hmm, interesting! Personally, I’m not really known for being an overly-enthusiastic, positive person who throws around high remarks. You can be sure that you won’t see me filling in a 9 anywhere anytime soon. If I leave feedback somewhere, it’s almost always more than sufficient or good. That got me thinking, if you collect feedback and measure the NPS, for example, how do you take someone’s background or culture into account? And how do you know if the default NPS categories (0-6 Detractors, 7-8- Passives, and 9-10 Promoters) match the feedback results? Let’s put it to the test…

Cultural differences in the workplace

Mopinion is internationally oriented. Not only do we have customers worldwide, but our team also consists of different nationalities. At the moment, the counter stands at 11 different nationalities. Since we work with feedback results on a daily basis, I was curious about the influence of someone’s culture on the score. So I walked around our new headquarters with the familiar NPS question: “How likely are you to recommend our new Philips coffee maker to friends and family?” I’ll highlight a few comments below.

First, I spoke to my closest American colleague. Enthusiastic as she is, she likes to participate in my small research. The coffee maker works great, doesn’t take up much space, looks great and there’s plenty of choice, so oops, a 9.

My colleague from the UK indicates that the British will certainly show any criticism in the scores and feedback. For them, a feedback form is the ideal way to make this known. And he gives the coffee machine an 8. It does what it’s supposed to do, but the water tank is not large, so you have to top it up regularly. Our Afghan colleague hesitantly gives an 8. He knows how to identify the positive points immediately, but he finds it difficult to attach a number.

In Greece, not everyone is used to feedback or giving a score, so a rating for the coffee machine is not easy. Purchases are made well-considered in Greece, they often have less to spend. So the Greeks look at the purchase with a critical eye. Our coffee machine gets a Greek 7.

The Dutch colleagues respond with an average of 8. It works fine, but it is all not spectacular, so with an 8 they still think they are generous and Philips can be happy with this high score. Of course, our small team is not representative of those countries, but it does confirm the differences between them. 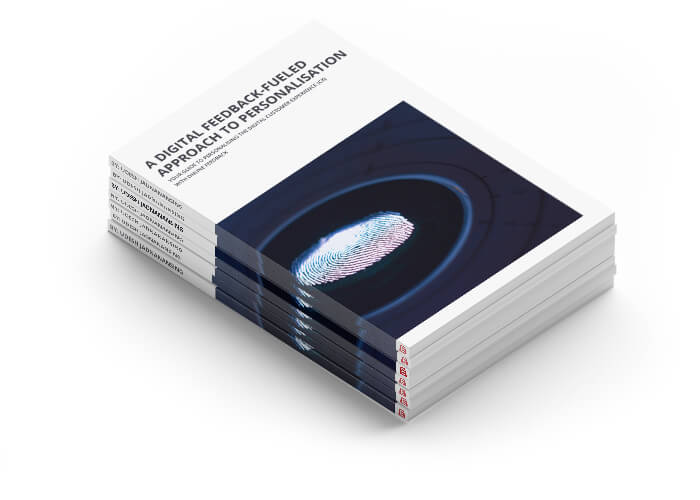 Discover how user feedback can fuel your personalisation efforts in this whitepaper! 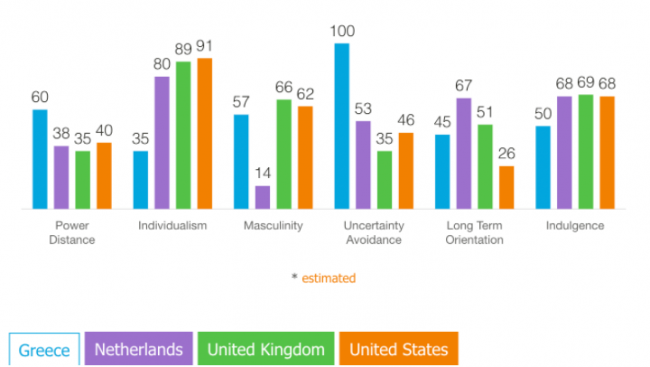 As a Marketeer, you have undoubtedly heard about Hofstede and its cultural differences during your studies. On the website of his research bureau, you can compare countries, and you can read about the cultural differences, so that you know what to take into account if you want to conquer the world. In the case of Mopinion’s new coffee machine, I’m curious if it matches the feedback I’ve received.

Let’s take a look at ‘Indulgence’, the extent to which people try to control their desires and impulses. This is certainly interesting for the purchasing behaviour of the residents. Greece does not score that high on this, and that is correct. Greeks think twice before buying, and impulse purchases are not easily made. Income is lower, but expectations are all the higher.

In short, ‘Uncertainty Avoidance’ stands for the willingness to choose the unknown. Greece scores high on this, so they will not easily choose something they do not know. This can affect feedback. So Greeks have long thought of what they want to buy, so feedback should generally be more positive if they buy the product themselves, but lower if they haven’t (like our coffee machine). That is also in line with the standard of living. ‘Individualism’ scores low in Greece, where there is much more of a ‘we’ feeling, in contrast to America. America is peaking in this area. So it’s all about the individual and what someone wants and expects, so you can expect fast and a lot of feedback. If you map this data from the countries where you collect feedback,

We could write hours about cultural differences here, but let’s go back to the NPS. Because now that you know that not everyone is sufficiently the same, and it depends on someone’s background, you naturally want to know what an NPS score can do for you. 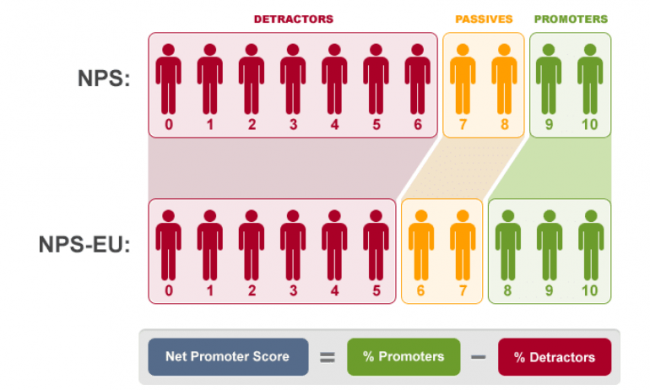 Set a standard for your multilingual feedback

If you know how a country handles scoring, you can adjust the NPS distribution for this region. By creating your own standard and using it consistently, you gain insight into multilingual feedback. This also allows you to correctly interpret the NPS score.

Collect your feedback, only in Europe, then you could make such a standard per country. If you really work all over the world, then it makes more sense to group. For EU countries, this distribution is chosen more often: 0-5 (Detractors), 6-7 (Passives), 8-10 (Promoters). This takes into account the fact that these countries are not known for their high scores. So with an 8 you also belong to the Promoters and no longer to the middle bracket. This would work fine for the Netherlands (and other EU countries), after all, an 8 is a nice, ‘excellent’ score here, while in the United States you are not wildly enthusiastic. In your feedback dashboard you can see and compare the NPS scores of the different countries or compare the NPS with previous years to see where you stand now.

Finally… How do you get the most out of the NPS?

You don’t just want to ask your customers for the NPS, you also want to make giving feedback fun. Because this interaction also contributes to customer loyalty. Try using the popular smileys or stars as a shape, instead of a grade rating. As long as you take the cultural differences into account, you’ll know what your NPS score really means, and by adding an open-ended question to your form, you’ll discover what you can improve on to increase the NPS.

Are you collecting customer feedback equally across all digital channels?

Inside Mopinion: How to Grow with Customer Feedback