The infamous marketing metric, the NPS, or net promoter score, is about to celebrate its 20th anniversary. In 2003, Reichheld, Bain & Company and Satmetrix Systems wrote about the metric in the Harvard Business Review. The article dictated that NPS score shows how satisfied and loyal customers are by asking just one, simple question. Sounds interesting for us marketers, right? Though, the real question is what can you do with it? The title of this article may have given away the answer to this, which is: not much!

This article was originally posted on Frankwatching

An NPS survey is often carried out a few times a year, without any real strategy behind it. You may say, “our score this quarter is 44!” Which sounds very nice, of course. Though, it’s likely that your marketing efforts or, perhaps, the new releases of development have contributed to this. However, you don’t know that for sure. And not only that, you’re only questioning your customers or users, and are probably leaving prospects out in the cold. 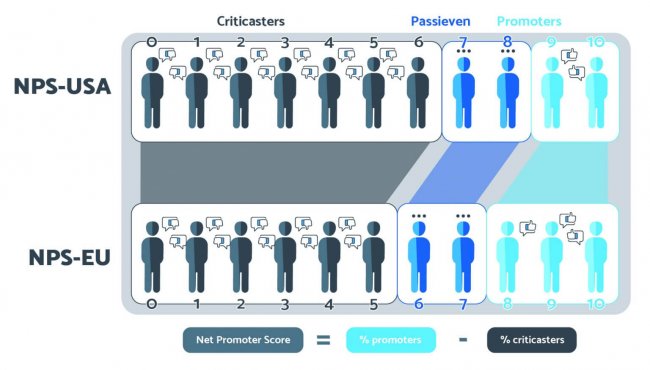 The image above shows that an NPS score differs per country. Where we in the Netherlands consider a 6 to be sufficient, in America it’s considered a fail. So don’t fixate on the outcome. NPS is more than just a number.

A guide to in-app feedback for mobile product owners and mobile marketers.

The most commonly used NPS question is “on a scale of 0 to 10, how likely are you to recommend our company to family, friends or colleagues?”

The second word is actually where it all goes wrong. Likely. Something can be very likely but still not happen. What use is the idea that it could be, that it could have been, or that it will perhaps ever happen? Nothing at all! Okay, all that positivity strokes your ego, but if no one actually takes action, it won’t get you anywhere.

A simple example: Let’s imagine someone wants to buy a pair of new trainers online around the 20th of the month. He buys them online and after 2 working days they are delivered at home. Then an e-mail comes in with the well-known NPS question. Everything went fine, so he gives it an 8. A screen opens asking the follow-up question: Why do you give it an 8? He fills in: ‘great trainers’. So this tells you what he thought about the product, and nothing at all about your company, the delivery or a recommendation.

Someone wants to buy a pair of new trainers around the 20th of the month. Once in the web shop, they put them in the shopping basket, go through all the steps, the payment options appear and the basket is abandoned. This person will never enter your NPS-flow, while they can give you information to grow your sales. You might be tempted to hazard a guess, “Ah, he doesn’t see Klarna, but he does see Afterpay, so he probably just doesn’t see enough payment options!” But you don’t know that, perhaps he thinks the shoes are too expensive right now.

How do you find out the reason for the abandoned shopping basket?

Do this by placing a feedback form with ‘exit-intent’ (it appears when someone is about to leave your website), this way you can discover someone’s reason for abandoning their cart. If someone says it’s too expensive, you can do a discount code campaign next time, just before the pay cheque. The discount code will allow that person to pay for the trainers next time and get them into your NPS flow.

Easy scoring with your manager

Still, there are many companies that place great value on the NPS. Do you have a manager who sees the NPS score as a KPI, or, has linked a bonus to it? Then now may be the time to show him or her that a high NPS score should be anything but a goal. Do this by proving that you can increase the NPS substantially, without it changing how your brand or product is perceived.

How do you increase the NPS?

The NPS revolves around one central question. If you want to increase the NPS, you can do so with a few simple changes to the feedback form. Change the familiar question into: “If asked, how likely is it that you would recommend our company to family, friends or colleagues?”
You can also give the scores a colour. By making the best scores green and the worst scores red, people are more likely to choose green. If you want to guide customers even more, weaken the options. Replacing ‘highly unlikely’ with ‘probably not’ sounds a lot less harsh and negative. And ‘probably’ sounds less heavy than ‘very likely’.

If you change this, more customers will fill in your feedback form. Though, whether it helps you and your business is another matter.

The missing ‘why’ behind the NPS

Of course, we’re not saying that measuring NPS is a waste of your precious time. As a marketer, you are used to getting into the shoes of your customers in all sorts of ways, so I assume that you have been collecting feedback via all the digital channels for a long time now. If you want to measure the NPS correctly, it is best to expand that one question with a follow-up question and, preferably, also an open-ended question.

By asking the right open question, you collect qualitative feedback, which tells you much more than how likely it is that someone would or would not recommend you.

Here is an example of the NPS form. 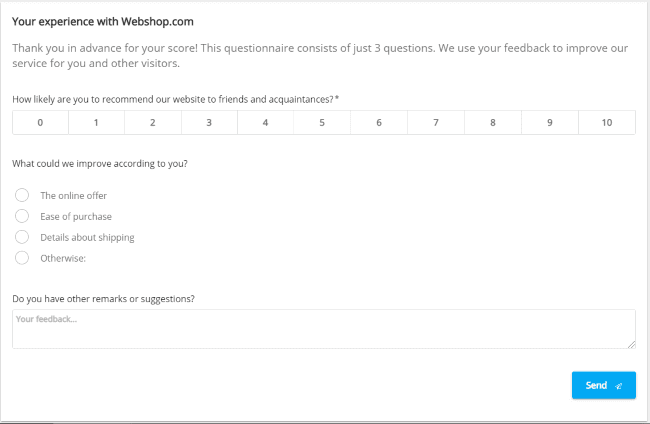 Be sure to ask not only if they would recommend you, but also what could be improved. That way you know what the score is based on, and finally the customer can fill in something himself. And believe me, if something didn’t go well, you are the first to know about it thanks to this open question. In this way, you discover the ‘why’ behind someone’s score and, of course, that is what it is all about.

What can you use NPS for?

If you do want to ask that one NPS question, it is important that you interpret and use the results correctly. There are three good reasons for popping an NPS form online:
1. Where do you stand in the market? Compare your scores with the market leaders in your sector and with competitors in the region. NPS is therefore suitable for benchmarking. 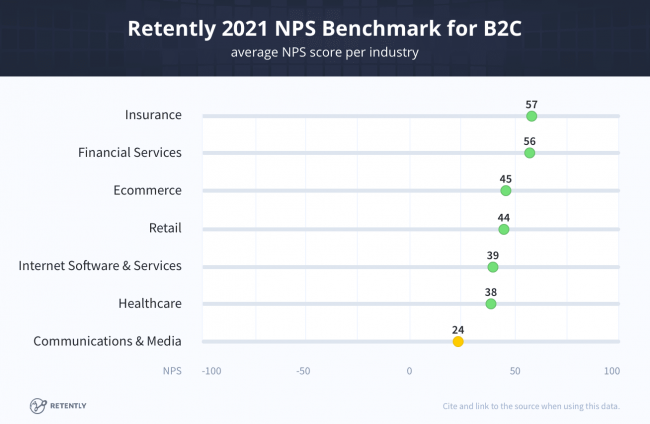 2. Segmenting customers. Based on the answers given to the NPS question, you can divide customers into three groups: Promoters (9-10), Passive Satisfiers (7-9) and Critics (0-6). You can then use this division to approach customers in a targeted manner.

3. Increase customer satisfaction. Know where the customer experience falls short, so that you can improve it. By not only asking for the NPS, but also for other KPIs, you learn much more about your customers. 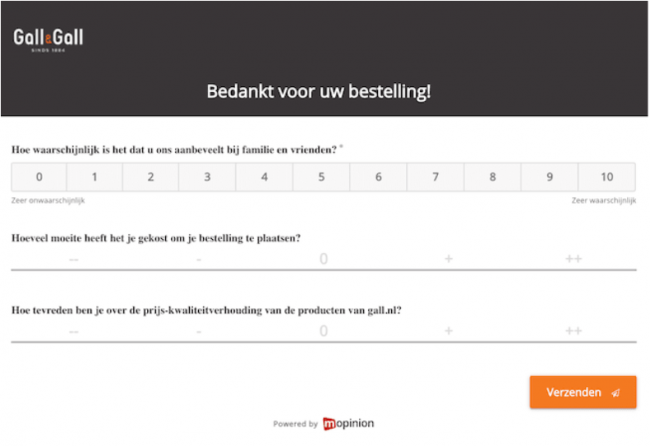 In the above example, Gall en Gall not only asks for the NPS, but also for Customer Effort Score (CES) and Customer Satisfaction (CSAT) in just one feedback form. It would work even better if it had an open question at the end, but this is already a good form. It costs your customers very little time while giving you lots to work with.

Now that you know what the NPS is worth (and what it isn’t), you naturally want to get straight to work. But wait, stop! First, decide what you want to know: what is your objective? And who are you going to ask? Then determine the questions and set up the right feedback mails and templates. When the feedback comes in, you can see the NPS score in your dashboard and use this to increase customer satisfaction. Discover the bottlenecks thanks to the open questions and create a customer experience that stays with everyone. And once you have achieved that … the recommendations will come naturally.

Feedback Fatigue: Give your customers a break

Stop the Hackers: How Mopinion ensures security and data protection

Starting your own Voice of the Customer Program

What is Customer Feedback? A guide to collecting and analysing your data

The Complete Guide to Email Feedback

What is Customer Feedback Management? Tips, tools and more…